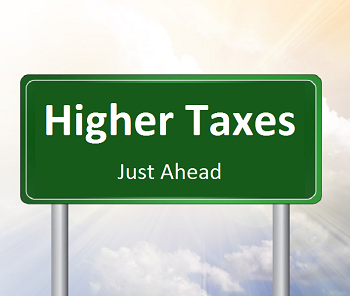 There is a three way race to see which provincial leader will tax a minimum wage employee at the top two tax brackets for their province.  Manitoba, Nova Scotia and PEI are the only three provinces in this race.  All three provinces are led by a provincial government that doesn't believe that purchasing power diminishes over time or they either believe that the citizens including some of the lowest paid individuals of their province deserve to have their purchasing power even further reduced.  It can't be the first one though, because all three of these provinces has seen an increase in wages for their provincial employees.
With only a 4% annual increase in the minimum wage, Manitoba is only two terms away from having a full time employee that gets paid the minimum wage, but will still earn enough to be in the second highest tax bracket.  Manitoba is not alone; Prince Edward Island is only two years behind Manitoba.

It is easy to become complacent about tax brackets not being indexed to inflation, mostly because the governments that don't index them, don't advertise a tax increase.  It truly is though, because they are increasing the amount of tax paid by the purchasing power amount of the dollar.
Important Note: One of the three provincial governments are about to increase the brackets.  Unfortunately, instead of finding inefficiencies in government and indexing the existing brackets to inflation, Greg Selinger is considering adding an additional surtax above $67,000. That is one way to solve the problem of having minimum wage earners in the second highest bracket within two terms, but something tells me that he doesn't understand what the actual problem is.